Leadership means to  inspire others to perform well. It is an important function of management which helps to maximize efficiency and to achieve organizational goals. Leading involve motivating, communicating, guiding and encouraging.

In this article we will be discussing the following topics.

3. Difference between manager and leader. 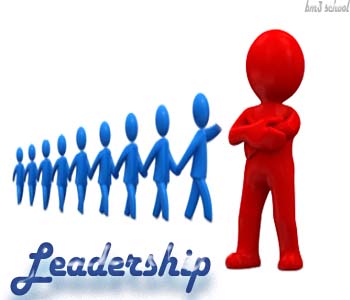 1. Autocratic leaders:
Autocratic leaders make decisions alone without getting advice from their team members. They retain their power and authority of making decisions and exercise complete control over the subordinates. Autocratic leaders sacrifice initiative and creative ideas which are developed in the mind of their team members. They don’t trust on their subordinates and not allow them to provide input before making decision. This type of leadership is considered appropriate, when decisions need to be made quickly and when there is a situation that needs to be controlled. Generally rigid organizations use this type of leadership. This kind of style also known as authoritarian leadership.

3. Laissez-Faire leaders:
Laissez-faire leaders allow team members to make decisions. However, they are responsible for all the decisions and actions. They delegate most of the powers and authority to team members to determine goals, make decisions and solve their own problems. This type of leadership is appropriate when team is highly capable, educated, skilled, experienced and does not need supervision and do their work effectively. This type of leadership also known as delegative leadership.

Following are three most important theories of leadership.

1. Trait theory
Trait theory suggests that leaders are born not made. It focuses on certain qualities of leaders which are inherited in them. According to trait theory a leader possesses the following qualities or traits:

2. Intelligent (having ability to understand quickly and easily)

3. Confident (full assurance of his ability)

4. Determined (having strong feeling to do something)

5. Adaptable (ability to adjust himself with changing environment)

6. Sociable (get close to others friendly)

6. Creative (having ability to create something rather than imitate)

7. Energetic (having a lot of energy)

10. Honest (dealing with others fairly)

2. Behavioral theory
Behavioral theory describes that how leaders behave. Behavioral theory does not seek capabilities of leaders as trait theory but it focuses on what actually leaders do. For instance, how they delegate tasks, how they communicate, how they motivate their subordinates and so on. There are three types of leadership styles which describe their behavior. They are autocratic, democratic and laissez-faire. Autocratic leaders make decisions alone without consulting their team. They do not delegate their power and authority. Democratic leaders allow team members to participate in decision making. However, final decision is made by leader. While laissez- faire leaders provide complete freedom to their subordinates to make decisions. They permit their employees to do whatever they want to do. Thus behavioral states leadership in terms of what leaders do rather than what they are.

3. Contingency theory
Contingency theory says that leader’s ability to lead is contingent (dependent) upon various internal and external situations. A leader must be able to analyze the situation and deal with accordingly. Fred Fielder developed his model of leadership in three critical dimensions that help determine what style of leadership will be most effective.

1. Leader-member relation:  Degree of trust and confidence that subordinates has in a leader.

2. Task structure: Extent to which jobs are structured and clearly defined.

3. Position power: The formal authority of a leader to supervised subordinates through reward and punishment.

If subordinates have trust and confidence, tasks are structured, and leader has positional power, the situation is considered favorable.
By Junaid Ahmed at December 14, 2016
Share:
Newer Post Older Post