Process of Communication with Diagram 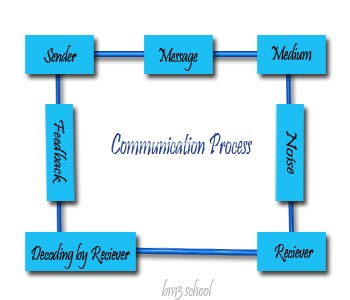 
1.  Sender        (Thought)
A person who sends the message is known as sender.   He acts as a speaker, writer or encoder. The sender chooses symbols such as words, graphic or visual aids that will be meaningful to the recipient. Sender may be an individual or a group or an organization who begins communication.

2. Message      (Encoding)
Message is the encoded idea transmitted by the sender. It is an essential idea that the sender wants to communicate. Message consists of an opinion, order, suggestions, views, instructions or material. The message may be verbal (words) and non-verbal (body language).

3.  Medium
When sender begins to transmit the message, he uses some kind of medium. Medium is the means through which communication flows from sender to receiver. The medium of communication includes letters, memos, reports, telegrams, telex, fax, post, telephone, charts and pictures.

4. Noise and Barriers
While transmitting the message to the receiver, there may be lots of noise and barriers. They are hurdles in the flow of communication. They may be caused by distraction, lack of concentration, poor language, typing mistake, misprinting, poor transmission, lack of trust and confidence.

6. Idea Received
After decoding the message by receiver, the idea that was produced in the mind of sender has been transmitted to the mind of receiver. For instance, the subordinate wanted to inform the manager about daily sale. Now the manager has received this idea.

7. Feedback
Feedback is final step in communication process. Feedback is receiver’s reply to the sender’s message. It gives assurance that receiver has received the message and correctly understood it. Feedback may be verbal or non-verbal.
By Junaid Ahmed at January 10, 2017
Share:
Newer Post Older Post