A bill of exchange is an unconditional order in writing, addressed by one person to another, signed by the person giving it, requiring the person to whom it is addressed to pay on demand or at a fixed or determinable future time, a certain in money to or to the order of a specified person or to the bearer. 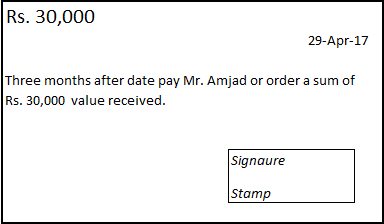 Essentials of bill of Exchange

1. Bill of exchange must be in writing.

2. The bill must contain an order to pay.

3. The order must be unconditional.

4. The amount payable must be certain.

5. The payment must be made in currency, not in barter.

6. The bill must be payable to a certain person or to his order.

7. The bill is payable at a specified date or on demand.

8. The bill must be duly stamped.

Parties of Bill of Exchange

Payee: He is the person to whom the amount of bill is paid. The payee may be the drawer himself or a third party.

Kinds of Bill of Exchange

1. Inland Bill: The bill which is drawn and payable in same country is called inland bill. The bill will also be an inland bill, if the drawer and drawee are in the same country and the payee resides in a foreign country.

4. Demand bill: It is the bill that is payable at any time. There is no specified period of time. It is also known as sight bill.

5. Time Bill: The bill which is payable after a specified period of time is called time bill. Generally, it is carry three months period plus three grace days.

6. Documentary Bill: When a bill carries documents like bill of lading, insurance policy, railway receipt or other shipping documents, it is known as documentary bill.

7. Non-Documentary Bill: When a bill does not carry documents it is known as non-documentary or clean bill.

8. Trade Bill:  It is the bill which is drawn and accepted against purchase and sale of goods. It is drawn by the seller (creditor) and accepted by the buyer (debtor) of goods.

9. Accommodation Bill: Such bills are drawn to help a party financially. They do not involve any business transaction.