Home » Banking » What is a Cheque? - Definition, Essentials, Kinds, Dishonor

What is a Cheque? - Definition, Essentials, Kinds, Dishonor

Cheque is an instrument in writing containing unconditional order, drawn on a banker, sign by the drawer, and payable on demand. It is used to withdraw money deposited in the bank. Following are the essentials of a cheque.

4. The order must be unconditional.

5. It must be signed by the drawer.

6. It must be payable on demand.

7. The amount in the cheque must be certain sum of money.

8. The payment must be made to a person, bearer, or self.

1. Bearer Cheque:
A cheque which is payable to any person who presents it at the counter of the bank is known as bearer cheque. It can be transferred to another person by mere delivery. However, it’s a risky cheque because if it is lost, the finder of it can receive cash from the bank.

2. Order Cheque:
A cheque which is payable to a person whose name is mentioned in it is called order cheque. In order cheque the word “bearer” is cancelled. It can be transferred to a third person by the order of the original payee.

3. Cross Cheque:
When a cheque is crossed by drawing two parallel lines on the face it becomes crossed cheque. Such cheque cannot be cashed at the counter of the bank. It is only be credited to the payee’s account. It has the following kinds.

General Crossing: When a cheque is crossed by drawing two parallel lines on the face of it with additional words like “Payees A/c Only” or “Not Negotiable” or “& Co”. 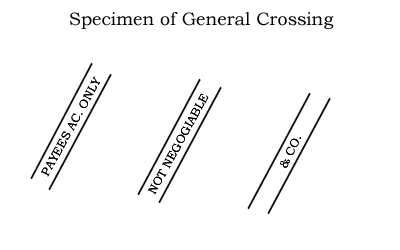 Special Crossing: When a cheque is crossed by drawing two parallel lines on the face of it with a particular bank name. 4. Open Cheque:
When a cheque is not crossed it is called an open cheque. Such a cheque can be cashed at the counter of the bank. It may be a bearer or an order cheque.

5. Pay Order:
When a bank orders another bank to pay a certain sum of money to a third party it is called pay order. It is applicable for payment within a city. The bank issues a pay order to the person who request for it and deposits sum equal to pay order plus bank charges. Pay order provides guarantee that payment will be made by bank. It is also known as banker’s cheque.

6. Demand Draft:
It is a cheque issued by one bank in one city or country to another city’s or country’s bank in favor of a third person. It cannot be dishonored as the amount is paid before. It is generally used to make payment outside a city.

Reasons for Dishonor of Cheque

Bank can dishonor the cheque due to following reasons.

1. Irregular signature:
When the drawer signature does not match with the signature bank has in its record. The bank will not accept the cheque for payment.

2. Insufficient Amount:
When the fund is not enough in drawer’s account to meet the cheque for payment, the cheque will be bounced. However, in case of overdraft facility, bank can accept the cheque.

3. Insanity:
The bank will not accept the cheque, if the accountholder gets insane and bank receives notice of insanity.

4. Bankruptcy:
When the accountholder is unable to pay of his debts in full, and this bankruptcy is declared by the court of law, the bank will not honor a cheque presented on behalf of such accountholder.

5. Post-dated Cheque:
When a cheque is presented to the bank for payment before the date written on it is called posted-dated cheque. This kind of cheque cannot be cashed till that date arrives.

6. Stale Cheque:
The cheque which is older than six months is known as stale cheque. The bank does not accept such a cheque.

7. Death:
When the accountholder draws a cheque, and before it is presented to the bank, he dies, and bank receives such information, the bank will dishonor the cheque.

8. Frozen Account:
If the customer account is frozen by the court of law, the bank will not honor the cheque on behalf of that customer.

9. Drawer’s Revocation:
If the accountholder draws a cheque and issues it, after he directs bank not to make payment for such a cheque, the bank will not accept it.

10. Alteration:
If any alteration in the cheque is made and is not confirmed by the drawer by his signature, the bank will dishonor it.
By Junaid Ahmed at May 08, 2017
Share:
Newer Post Older Post