Home » Economics » 4 Phases of Business or Trade Cycle with Graph

4 Phases of Business or Trade Cycle with Graph


Business cycle refers to the fluctuations in an economy.  It illustrates the expansion and contraction in economic activities of a country for a specific period of time. This expansion and contraction takes place due to variations in investment, employment, production, and incomes. These changes in economy represent different phases of business or trade cycle. The phases of business cycle are following. 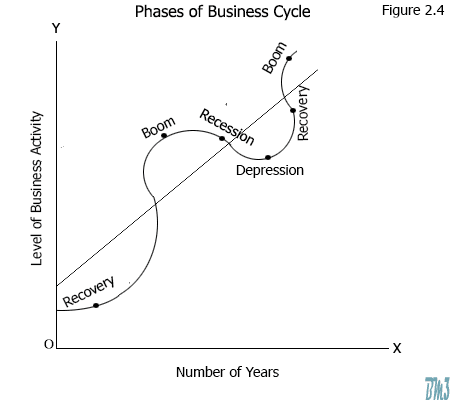 Under depression the economic activities fall considerably. Production, employment, demand, profit and income decline. There is a reduction in consumer goods and as well as capital goods. As demand is less so the plants are not utilized to their full capacity in factories. Profit margins decrease sharply due to low demand.   Banks are not willing to advance loans to businesses.  The confidence of businessmen is replaced by uncertainty and they became hesitant to make fresh investments. Even some businessmen are compelled to close down their production and lay off workers.  All sections of people suffer under the period of depression.

It is the turning point from depression to expansion. The economy again enters into the prosperity. The businessmen become optimistic and make the renovation programs to come back to the market.  Banks and other financial institutions begin to expand credit to industries. During the period of recovery, the demand starts rising, production increases which leads to increase income and employment.  When income of the consumers increases, it increases their purchasing power which leads to rise demand for consumer goods. Recovery continues until the economy returns to steady growth levels.

Here the phase of recovery gets momentum.  The economy reaches to the peak which is the highest point of business cycle. Under boom there is a continues rise in level of production, employment, wages, aggregate demand, profits, volume of credit, investment and standard of living. There is a large expansion of bank credit. The high profit margins induce businessmen to enhance their investments.  The old machines are fully utilized and as well as new machines and factories are set up which increase demand for workers. During the period of boom, the economy is in the position of full employment. This phase is also known as prosperity phase.

When the period of boom ends, recession begins. In the period of recession, investment, employment, bank credit and aggregate demand starts declining. A wave of pessimism spreads and businessmen starts losing confidence and become pessimist (Negative) about future of business. Business expansion stops, stock market falls, credit contracts, orders for raw materials reduced, profits decline and workers start losing their jobs. This situation of crisis firstly faced by few industries and slowly spread to all industries.  If recession continues, ultimately, it will turn to depression and business cycle repeats. However, usually, recession lasts for a short period of time.
By Junaid Ahmed at March 28, 2018
Share:
Newer Post Older Post