The Four Factors of Production

The factors of production are the building blocks of the economy. They are the resources or inputs that allow us to produce goods and services which make business possible. The factors of production are divided into four categories, such as land, labor, capital and entrepreneurship. They play a vital role in economy. Without these factors, it is impossible to produce goods and render services. They are illustrated below in detail. 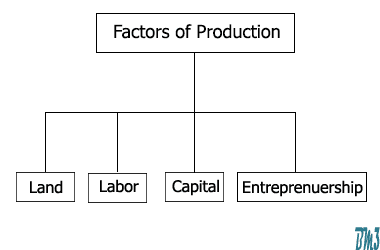 Land is not just physical place where economic activities take place but it also includes all the natural resources that come from it. Some of them are natural gas, coal, oil, gold, and forests. These natural resources play an important role in the production of goods. They are used as raw materials in the production process.  The natural resources may be renewable and non-renewable. Forest is the example of renewable resource and natural gas is the example of non-renewable. If you use a mango from a tree, you are using the part of land. The income earned by owners of land is referred to rent.

Labor is the second factor of production. Labor includes all the efforts that human resources contribute to create goods and services. The efforts may be physical or mental. Labor is an active factor of production. It is a flexible resource that can be allocated to different sectors of the economy. An organization trained labors in order to make them more efficient and productive. If you are working in a company, it means you are contributing labor resource to the production of goods and rendering of services. The reward or income earned by labor is known as wage or salary.

Capital is the third factor of production. Think about businessman, he may invest machines, buildings, tools, computers, vans, trucks, and other assets to start his business.  These assets are known as capital. For example, if a firm is dealing in manufacturing cars, the capital will include the factory and all machinery in the factory used in manufacturing cars.   Increase in capital goods lead to increase in productive capacity of the economy. The income earned by owner of capital is interest.

Entrepreneurship is necessary to start, maintain and develop a business. An entrepreneur combines the other three factors such as land, labor and capital to produce goods and services and make a profit. For instance, for making a car there is availability of land, labors, machines and the entrepreneur who combines these factors to earn a profit. The entrepreneur acts as an innovator who find new ways to produce goods and services to bring to consumers. Bill Gates is the example of innovator who developed software products and build the world’s largest IT company (Microsoft). The income earned by entrepreneur is called profit.
By Junaid Ahmed at March 30, 2018
Share:
Newer Post Older Post