The law of diminishing returns is very old and fundamental principle of economics. It plays an essential role in production theory. According to the law, when variable factors of production are successively increased while keeping one or two other factors constant, then after a point the marginal output will begin to decline. For example, adding more and more workers to a job will increase total output but diminish marginal output after a certain point.

The law of diminishing returns can be explained with the help of a schedule and a diagram.

The law of diminishing returns can further be illustrated by using an imaginary diagram. 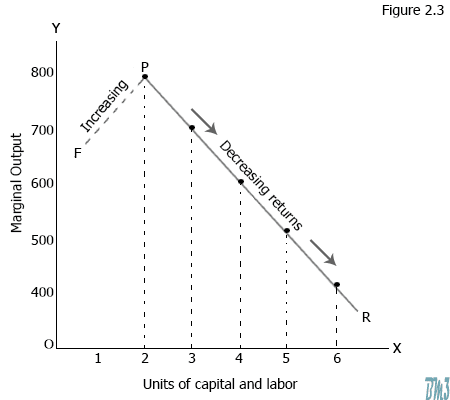 Assumptions of The Law

The law of diminishing returns is based on the following assumptions:

1. Technique of production must remain constant.

2. The law is applicable in short run. It will not work in long run, because in long run all factors of production become variable.

3. All the units of variable factors should be similar to each other and are equally efficient.

4. At least one factor of production must be kept fixed.

The above table shows as the units of labor is applied successively while keeping the units of machine constant at 7, the marginal output of bottle is declining and the marginal cost per bottle is rising which is representing the law of increasing cost.
By Junaid Ahmed at March 13, 2018
Share:
Newer Post Older Post