Average and Marginal Propensity to Consume - APC vs MPC

Propensity to consume represents the relationship between consumption expenditure and disposable income. This concept was introduced by British economist John Maynard Keynes in 1936. The study of consumption behavior plays a vital role in economics. It helps to determine the growth and development of the economy. Consumption is the beginning and as well as end of all economic activities. When a man wants something, then he makes an effort to get. So, he satisfies his want through consumption. When a person earns more he tends to consume more. The consumption pattern of a person shows the standard of his living. The propensity to consume has two technical properties which are explained below.


Now suppose, if level of income of a nation is Rs. 200 billion while consumption spending is Rs. 140 billion, then propensity to consume of the nation can be calculated by dividing:

This indicates that the 75% of income is consumed while the remaining 25% is allocated for savings.

Another important Keynes theory of consumption is marginal propensity to consume. It is the ratio of change in consumption to change in income. It can be expressed as:

The table will be helpful to further understand these two concepts. 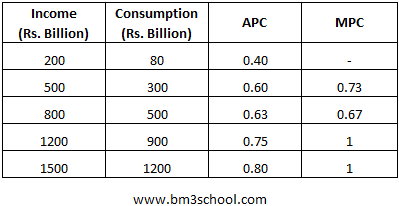 When the consumption level of people is high, more goods are produced that can boost the economy. On the other hand, when people tend to save more and consume less, fewer goods are produced which leads to fewer jobs and increased business closures.
By Junaid Ahmed at November 28, 2018
Share:
Newer Post Older Post