Principles of Delegation of Authority

Junaid Ahmed
December 04, 2018
Management
Assigning tasks to subordinates and giving them authority to perform the tasks is delegation of authority. It is an important function to carry on work systematically in an organization.  It helps to minimize the burden of a manager because through process of delegation the daily responsibilities of the manager are reduced. The delegation provides a chance to grow and take initiatives to whom the authority is delegated. 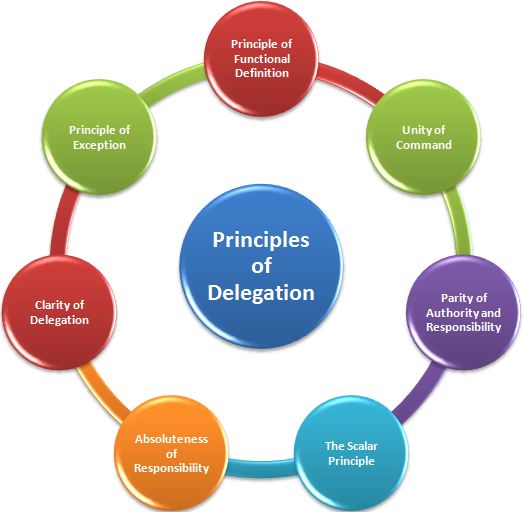 Principles of Delegation of Authority


Following are the principles that serve as guidelines for effective delegation of authority.

An organization is categorized by various functional departments. Each department has its specific objectives. When these goals and objectives are clearly defined, then the manager can determine the requirements of that specific position. When the position is clearly defined then delegation of authority becomes easy. The subordinates can perform efficiently when they are made aware of their duties and the expected results.

Unity of command is one of the basic principles of management. According to this principle, a subordinate should have a single superior from whom he obtains authority and to whom he is solely accountable. It means the subordinate should receive orders and instructions from a single superior and report to such a superior. On the other hand, if the subordinate is required to report to more than one superior, there may be confusion and conflicts.  Unity of command also eliminates overlapping and duplication of work.

3. Parity of Authority and Responsibility

According to this principle, there should be a proper hierarchy in the organization. It means there should be clear lines of authority running from top to bottom in the organization. When authority flows from top to bottom, it becomes easy for the subordinate to know who delegates authority to him and to whom he will be accountable. This also helps the subordinate to whom he should contact for matters beyond his authority.

This principle suggests that the subordinate should be given adequate freedom to perform his duty under the purview of his authority. The manager should not interfere the subordinate while he is performing his duty even he does the mistakes.  But under exceptional circumstance, the manager can interfere in the work of his subordinate and even withdraw the authority delegated to him.
By Junaid Ahmed at December 04, 2018
Share:
Newer Post Older Post