Home » Accounting » The 4 Methods of Depreciation with Examples

The 4 Methods of Depreciation with Examples


Depreciation is an allocation of fixed asset. The fixed asset may be furniture, equipment, building, machinery, vehicle and land that are purchased for long term use. The land is only the fixed asset which is not depreciated as value of the land increases with passage of time.  The fixed assets are appeared on the balance sheet. Given below are some technical terms which should be learnt before going to the methods of depreciation. 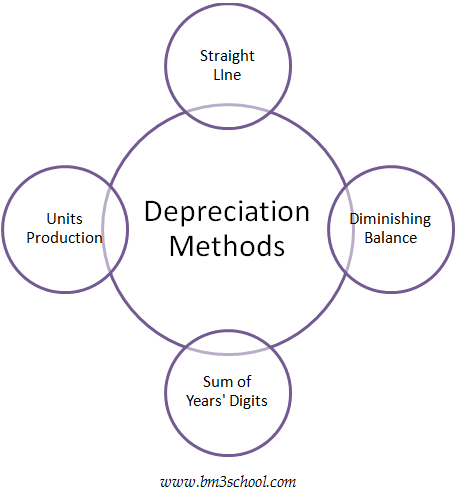 Estimated life: It is an estimate number of years for the asset to remain in service. The useful life of the asset is used to determine depreciation.

Salvage Value: It is the estimated resale value of an asset after its useful life. The salvage value is used to calculate depreciation. It is also known as scrap value or residual value.

Book Value:  The book value is calculated by extracting allowance for depreciation from the original cost of fixed asset.

There are four main methods of depreciation that are listed below.

Example:
Suppose, a manufacturing firm acquires a plant for Rs. 1000,000 in January 01, 2020. The estimated life of the plant is ten years and the scrap value is Rs. 80,000. So the depreciation expense would be calculated as:

Thus manufacturing firm will take Rs. 92,000 depreciation expense each year as shown below. 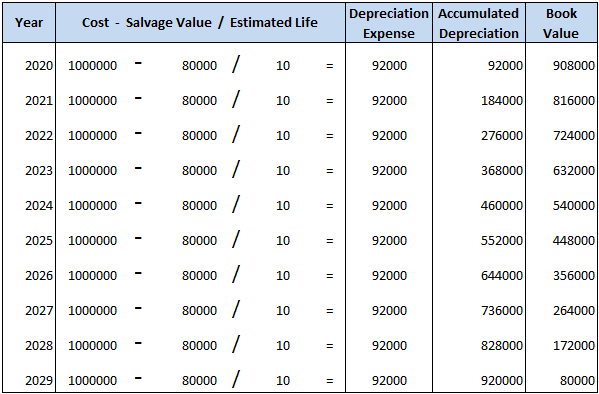 Example:
Suppose, a manufacturing company purchases a machinery for Rs. 1400,000 in January 01, 2020. The estimated life of the machinery is ten years. The company uses diminishing balance method in order to determine depreciation expense with the rate of 20%.  The depreciation expense for 10 years would be calculated as shown below: 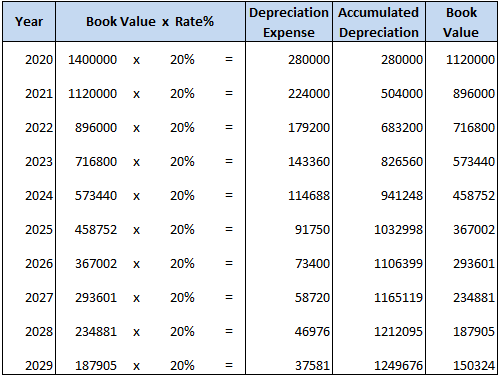 Sum of the years’ digits method is the accelerated depreciation technique which is based on the assumption that productivity of the assets decreases as they become old. In simple words, this method attempts to charge a higher depreciation expense in early years of the asset because the asset is more productive when it is new. Given below is the formula of sum of the years’ digits method:

Example:
Suppose, a manufacturing firm acquires a machinery for Rs. 600,000 in January 01, 2020. The estimated life of the machinery is ten years and the salvage value is Rs. 50,000. The company uses sum of the years’ digits method for determination of depreciation. The depreciation expense for 10 years would be calculated as shown below: 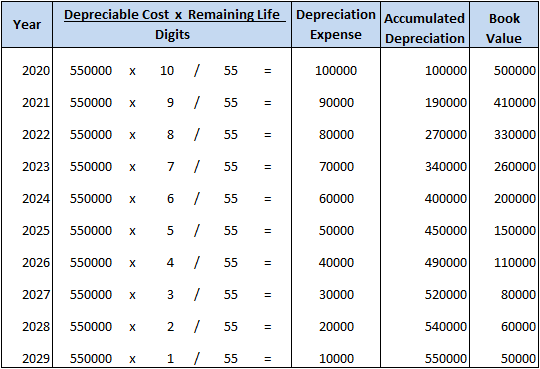 Units production method depreciates asset’s value based on the total number of units expected to produce over its useful life. Thus, the depreciation will expense will be high, if the asset is heavily used. The useful life of the asset is estimated in terms of number of units that is expected to produce or working hours rather than numbers of years. This method is also known as units of activity method. Given below is the formula of it: