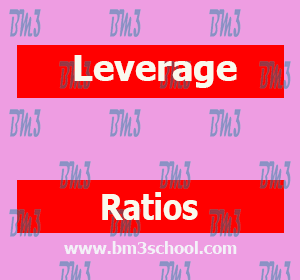 When stockholders have large amount of investments in the firm’s assets, the firm is considered less leveraged. On the other hand, when creditors have large of debts in the firm’s assets, the firms is said to be highly leveraged. If this situation continues for a long period, it may lead to bankruptcy. Therefore, these analyses are vital for investors to know the capital structure of a firm. In order to measure the capital structure of a firm, the following leverage ratios are considered:

The above example tells that the firm has low debt ratio indicating that most of its assets are fully owned. A debt ratio greater than 1.0 indicates that a firm has more debt than assets. While the debt ratio less than 1.0 indicates that a company has more assets than debts as shown in the above example. If the debt ratio is equal to 1.0, it means total liabilities are equal to total assets. In this case, the company would have to sale out total assets in order to pay off its total liabilities. This is highly leveraged, once the total assets are sold, the business no longer can operate. So, it is favorable to have debt ratio less than 1.0.